I just finished reading a novel that I would recommend to anyone: ISAAC by Robert Karmon. I read the novel as part of the research for a double role that I am working on for the next few weeks. Robert Karmon is also a playwright and he adapted his novel to the stage play “The Resettlement of Isaac” in which I will play two of the lead roles. We will perform it at the third annual Jewish Film Festival in Southampton on August 21st, directed by Robert Kalfin (founder New York’s Chelsea Theatre Center, winner of five Tony Awards, four Tony nominations and 21 Obie Awards).

I am truly astonished by Karmon’s book. In Dutch we have an expression that says: “This book reads like a train”. And it means that you can’t put it down once you start reading. It is exactly what happened to me.

Karmon’s novel is inspired by the true-life story of Isaac Gochman, a 16 year old Polish Jew, who looses all his family and friends in one night stripped, shot to death and buried by the Nazis in an endless trench. Miraculously Isaac survives the slaughter and when he wakes up he finds himself among the dead bodies of over 20,000 Jews. Then his incredible journey of survival in the Polish forest begins. For months he travels by himself with whatever the woods have to offer. Then he adopts a new identity and he joins the Russian Partisan Brigade where he becomes a hero and falls in love for the first time. ISAAC is a beautiful story about survival, courage and love. For more information on the novel check it out here.

If you happen to be in the Hamptons on August 21st, come out and see the staged play reading at 7pm. For more details and information, click here. 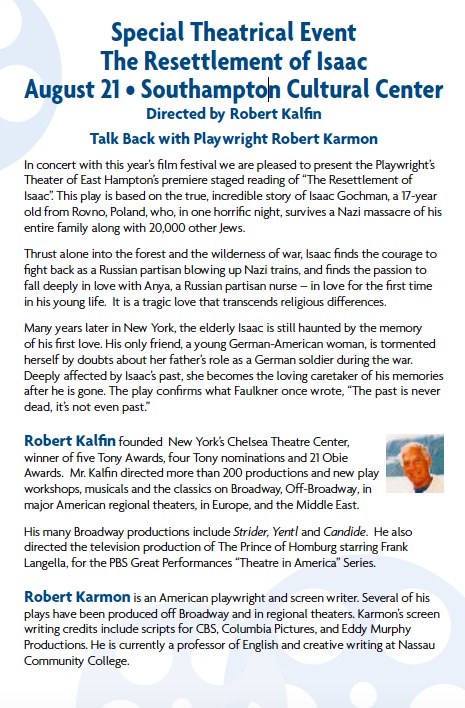