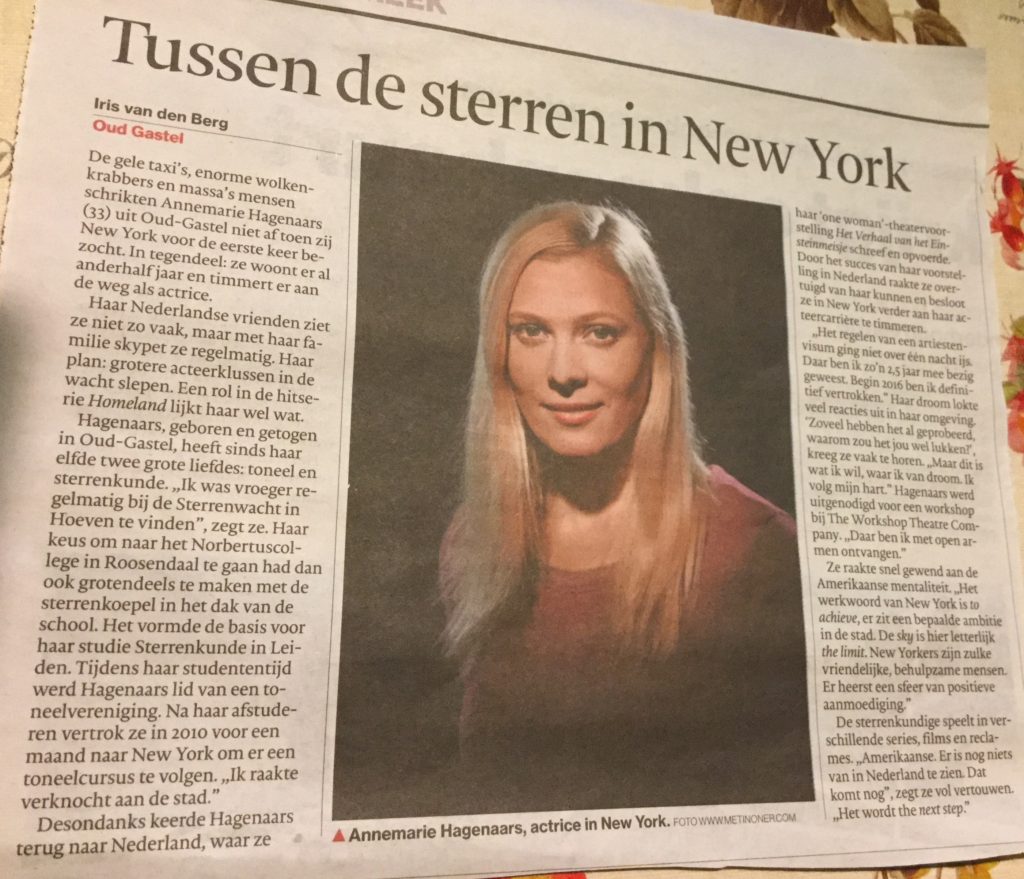 The Dutch Newspaper BN DeStem also posted a version of the interview online that includes the trailer of the Dutch film “Vleugels” and my European showreel. Thank you BN DeStem Roosendaal! For the online version CLICK HERE.

OUD GASTEL – The yellow taxis, huge skyscrapers and masses of people did not alarm Annemarie Hagenaars from Oud-Gastel when she first visited New York. On the contrary: she has lived there for a year and a half now and is working as an actress. She does not see her Dutch friends very often, but she regularly skypes with her family. Her plan: getting bigger acting jobs. A role in the hit series Homeland is something that she would like. Hagenaars, born and raised in Oud-Gastel, has had two great loves since the age of 11: theater and astronomy. “I used to be a regular at the Observatory in Hoeven,” says the actress. Her choice to attend the Norbertuscollege in Roosendaal was largely due to the observatory on the rooftop of the school. It formed the basis for her studies in Astronomy in Leiden. During her student days, Hagenaars joined a theater company. After graduating, in 2010 she traveled to New York for a month to take a drama course.  “I was immediately sold to the city.” Nonetheless, Hagenaars returned to the Netherlands, where she wrote and performed her “one woman” theater show: The Story of The Einstein Girl. Because of the success of her performances in The Netherlands, she decided to continue her career in New York. “Getting an artist visa was not easy. It took about 2,5 years before I got my artist visa. I moved to New York at the beginning of 2016. “Her dream provoked many reactions in her environment. “So many have tried it, why would you succeed?” She often heard. “But this is what I want, what I dream of. I follow my heart.” Hagenaars was invited to join the WorkShop Theater Company. “I was welcomed with open arms.” She quickly became accustomed to the American mentality. “New York’s verb is to achieve“; the city breathes ambition. The sky is literally the limit here. New Yorkers are such friendly, helpful people. There is an atmosphere of positive encouragement here. “The astronomer plays in various series, films and commercials. “Broadcast in America. Nothing is on air in the Netherlands yet. That will come “, she says confidently. “That will be the next step.”